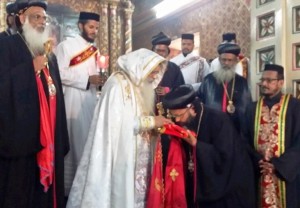 MUSCAT: HH Baselios Mar Thoma Paulose II, Catholicos of the East & Malankara Metropolitan, along with Ahmedabad Diocesan Metropolitan HG Pullikkottil Dr Geevarghese Mar Yulios will lead the installation ceremony of the holy relics of St Geevarghese Mar Dionysius of Vattasseril (1858-1934) at Muscat Mar Gregorios Orthodox Maha Edavaka on March 4, 2016, Friday.
On February 27, Fr Jacob Mathew, Vicar, Mar Gregorios Maha Edavaka, Muscat, collected the holy relics during a solemn ceremony held at the Orthodox Theological Seminary (OTS), (Pazhaya Seminary) Kottayam, from HH the Catholicos and the Diocese Metropolitan Mar Yulios and other Metropolitans. The vicar also attended the 82nd feast of St Vattasseril Geevarghese Mar Dionysius on February 27 at OTS.
The installation ceremony at the Maha Edavaka will be preceded by a tri-mass ceremony at St Thomas Church Ruwi, with the Catholicos as the chief celebrant.
During the two-day visit to the Sultanate, the Prelate will also present the Thanal Charity Award for 2015-2016 on March 3, Thursday, and inaugurate the newly renovated office of the Muscat Maha Edavaka at the parsonage on March 4.
The great luminary of Malankara Orthodox Church, St Dionysius is popularly known as ‘Malankara Sabha Bhasuran’ bestowed on him in recognition of his rich contributions to the Orthodox Church. St Dionysius was the disciple of the first declared Saint of Malankara St Gregorious of Parumala. St Dionysius was the Malankara Metropolitan from 1909 to 1934. He entered eternal life on February 23, 1934, and his body was entombed at Old Seminary, Kottayam. In 2003, The Holy Episcopal Synod canonised St Dionysius as a Saint on his 69th Remembrance Day on February 24, 2003.