SPEECH BY THE PRESIDENT OF INDIA AT THE RELEASE OF THE COMMEMORATIVE POSTAGE STAMP ON OLD SEMINARY, KOTTAYAM

SPEECH BY THE PRESIDENT OF INDIA, SHRI PRANAB MUKHERJEE AT THE RELEASE OF THE COMMEMORATIVE POSTAGE STAMP ON OLD SEMINARY, KOTTAYAM 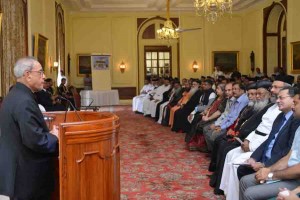 1. It gave me great pleasure to release the postal stamp commemorating the 200 years of the “Old Seminary”in Kottayam. The seminary was set up by theMalankara Orthodox Church situated inKerala, a state known for the peaceful co-existence of different religions and communal harmony. The Seminary and the Orthodox Church too played their part in achieving the laudable goal which led to the state realizing the complete separation of spiritualism and communalism.

2. For nearly 14 Centuries, the three major religions of Kerala, Hinduism, Christianity and Islam have existed in peace and harmony, respecting each other’s belief and cooperating to promote social welfare. In fact, Kerala was the first state in the country in which both Christianity and Islam took roots with people voluntarily choosing different religious beliefs.

3. There is another significant feature of communal relations in Kerala. The absence of animosity between religions is considered tolerance. But this only means the absence of negativity. But in Kerala it has a different dimension. It is that the society has moved to a higher plane where religions have cooperated to promote other religions. It is this extraordinary feature of the society that led to the Hindu Kings of Kerala giving land to both Christians and Muslims to set up their places of worship. In fact, the land for initially setting up the Old Seminary and the first contributions for its development came from the coffers of the Travancore Ruler, Gowry Parvathi Bhai, Regent Queen.

4. India’s tallest leaders like Dr. S. Radhakrishnan and Pandit Jawaharlal Nehru acknowledged the long and glorious history of the Christian Church in Kerala, and lauded its religious tolerance and respect for other religions. Dr. Radhakrishnan noted that the Syrian Christians have only welcomed those who wanted to join the faith out of their own volition. Pandit Nehru recalled the fact that Christianity in India came in the 1st century itself even before Europe embraced it.

5. It is significant that the St. Thomas or Malankara Christians in their 2000 years of existence has assimilated and in many cases retained some of the important social customs and rituals of the Hindus. An Orthodox Christian marriage ceremony incorporates many such Hindu customs for instance.

6. The lighting of oil lamps in and around Churches, the raising of the flagstaff and flags during festivals and the custom of entering the Churches barefoot are all Hindu traditions that have become a part of the Church practice. These bear testimony to the sharing of traditions by both the religions.

7. I have been given to understand that the Orthodox Church has made enduring contributions to the betterment of the life of the people of Kerala. If Kerala is the shining example of universal literacy, the role of the Church in spreading education cannot be ignored. One of the earliest contributions of the Christian Community is the setting up of a large chain of elementary Schools throughout Kerala, under the supervision of the Seminary and its leaders.

8. The chain of elementary schools set up under the supervision of the Seminary was the first indigenous initiative towards universal literacy and education, which has today made Kerala the most literate state in the country. The charity and healthcare activities of the Syrian Church also originated in the Old Seminary under its leadership. It contributed to the improvement of the overall literacy in the state, created greater access to healthcare and empowerment of women leading to higher standards of living and quality of life in the state. This has resulted in Kerala having the lowest infant mortality, lowest birthrates, highest number of hospital beds per lakh population, best male to female population ratio and one of the highest life expectancy in the country. It is heartening to note that the example set by Christian Churches have been emulated by all religions and Communities.

9. In the area of Human Development Index, Kerala has done remarkably well. The role of the Church in healthcare, Women’s empowerment and upliftment of the less privileged section of society are simply unparalleled.

10. In many ways, the Old Seminary played a seminal role in the unique form of development of Kerala. The Seminary, on its part took upon itself the onerous task of overall development, education and welfare of the whole State instead of limiting its role to the narrow and limited task of teaching religious practices and liturgy to the clergy.

11. It is inspiring to note that the benefits of all these humanitarian and charity work of the Seminary and the enlightened and progressive leadership were not confined to any particular religious group. It has benefitted all in the society, irrespective of religion, caste and creed. This has inspired the other communities to set up similar institutions all over Kerala.

12. It is not without reason that the Seminary has to its credit several ‘firsts’ in the area of Human Development, apart from its contributions to the training and development of the clergy of the Church. I am informed that the ‘Cottayam College’, which was co-located with the Seminary was the first English teaching institution in the State. The College taught, apart from Malayalam, Greek, Latin, Syriac, Hebrew and Sanskrit.

13. The first printing press was also established in the premises and scholars of the Seminary took active part in unifying and standardizing the common Malayalam Script. Benjamin Bailey along with Hermann Gundert, were among the pioneers of the development of modern Malayalam language and script. To imagine that the first Malayalam Dictionary was developed and published by a Theological Seminary is a tribute to the commitment of the leaders of the Seminary and the Church itself to the overall development of Kerala. The credit of translating Bible into the first Indian language, Malayalam, also goes to the Seminary and College under the leadership of Benjamin Bayley.

14. It is interesting to note that the Orthodox Theological Seminary continues the traditions of its predecessor to take active interest in developing nontraditional and liberal disciplines like Counseling, Devotional Music, Meditation and Fine Arts. I hope, in keeping with the great tradition of universal brotherhood, the portals of the Seminary would also accommodate centres for the study of comparative religions and Philosophy.

15. I can say without hesitation that the Orthodox Church and its leaders trained in the great portals of the Old Seminary have not only made sterling contributions to the Human Development of the State but also worked hard to promote shining example of communal harmony and mutual respect among the members of different religions. This is in fact the true accomplishment of the old Hindu concept of “Vasudhaiva Kutumbakam” – “The World is One Family” as envisaged in the ancient Hindu scripture, Mahopanishad.

16. With these few words, I conclude hoping that the Church and the Seminary would continue with their good work for the society.