KOTTAYAM: The authorities should show a little more justice to the Malankara Orthodox Syrian Church which has always pledged allegiance to the Indian Constitution and judiciary, said P C George MLA here on Tuesday.

Those who are in power should realise that there is a strong feeling within the church against those denying justice to it, the Kerala Congress (M) MLA said after meeting Catholicate Baselios Marthoma Poulose II at Devalokam Bishop Palace here.

Earlier, there were 18 MLAs from the Orthodox community. Now, the number has reduced to one and that is Oommen Chandy. The church has not got any benefit from this MLA, he said. The church felt cheated. Even the court directions are not implemented. The reason behind the discrimination to the church is not known.

By not announcing its decision to boycott six ministers, the church has shown its dignity. George said he met the Catholicate to seek support from him to fight against corruption adding that he got a self confidence like never before after the Catholicate blessed him.

‘No Plan to Boycott Ministers’

wever, the Church authorities have denied the statement by George. ‘’It is true that P C George met Catholics and held discussion in a closed room. Being the head of the Church the Catholicos might have conveyed apprehension of the Church to George. But no decision has been taken  to boycott ministers, though the Church is aggrieved over the lethargic attitude by the government in implementing the court orders’’ said Church spokesperson P C Elias. 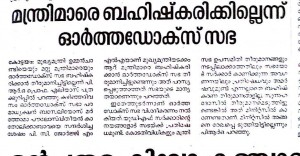