HH The Catholicos visiting the Mother See of Holy Etchmiadzin 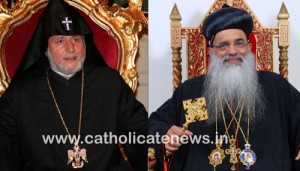 2015 marks the 100th Anniversary of the Armenian Genocide, where 1.5 millions of Armenians were martyred and the natives had lost their homelands along with their holy places. A solemn liturgical event of canonizing the martyrs has been set by the Mother See of Holy Etchmiadzin.

The present visit of His Holiness Catholicos Baselios Marthoma Paulose II with his delegation, His Grace Dr. Mathews Mar Severios Metropolitan, Fr. Dr. K. M. George and Fr. Thomas Zachariah would certainly enhance the bilateral relations of the two Churches. The aforementioned mutual visits of the primates and the delegations of the two Churches are not confined to the relations established among hierarchs but have gone deep into the good memories of the faithful too. The whole of the Malankara Orthodox Church, in the spirit of prayer, participates in the commemorative event of their dearly lost ones.