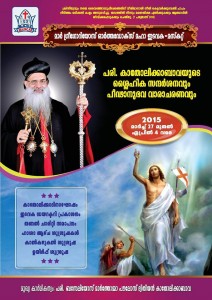 MUSCAT: HH Moran Mar Baselios Marthoma Paulose II, Catholicos of the East and Indian (Malankara) Orthodox Metropolitan, will be the chief celebrant for this year’s Holy Week services at the Mar Gregorios Orthodox Maha Edavaka (MGOME). His Holiness will arrive from Kochi at the Muscat International Airport on March 26, Thursday at 9.30 am.
In the evening, the Catholicos is scheduled to address a press conference with the print and electronic media followed by evening prayers and committee meeting with MGOME.
On Friday March 27, there will be meeting with spiritual organisations, CSI Church and photo sessions.
The Holy Week begins on March 27 with a Holy Eucharist followed by Catholicate Day Celebrations and release of the parish directory. In the evening, the primate will inaugurate the valedictory of Thanal Charity project during which Indian Ambassador to the Sultanate Shri J S Mukul or Deputy Chief of Mission Gloria Gangte will preside. The Catholicos will present the first Thanal Charity Award instituted in the name of LL His Grace Dr Stephanos Mar Theodosius (1924-2007) to Fr Davis Chiramel, Chairman, of the Thrissur-based Kidney Federation of India. On March 28, the Catholicos will lead the Holy Eucharist at the St Thomas Church at 8.30 am, followed by ecumenical clergy meeting at 11 am and St Thomas Committee meeting at 12 pm.

Elaborate arrangements have been made for the Holy Week services. On behalf of the managing committee, Vicar/President of MGOME Fr Joji George Koickalethu and Associate Vicar Fr Kuriakose Varghese has requested the faithful to attend the Holy Week in large numbers.