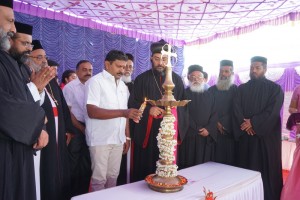 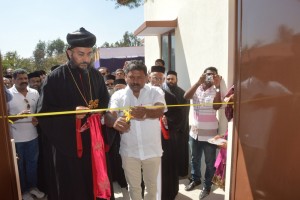 BILIKERE, MYSORE: Bengaluru Diocese of Indian Orthodox Church is giving increasing importance to the existing Diocese Mission projects at Bilikere, Mysore, in Karnataka and in Eluru, Andhra Pradesh.
Diocese Metropolitan HG Dr Abraham Mar Seraphim had started a home for the differently abled girls and an English medium school at Bilikere in Hunsur Taluk of Mysore district.
On January 26, Metropolitan Mar Seraphim led the inauguration and consecration of the project.
H P Manjunath, Hunsur MLA, cut the ribbon and lighted a traditional lamp to signal the formal opening of the school and home. A number of clergy and faithful from various parishes in Bengaluru also attended the function.
At present construction in about five-and-half acres in the district has begun in right earnest. The Diocese is planning to build an international school which will have Kannada school primarily for the local students and aims to provide quality education. The future plan is to construct on the remaining four acre area with an international school and hostel facility.
The estimated cost of the institution which can accommodate about 20 girls came to around Rs 85 lakhs. Mar Seraphim says the school will remain as a mission centre for the Diocese.