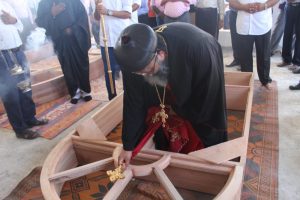 On October 18, Ahmedabad Diocese Metropolitan HG Dr Geevarghese Mar Yulios, led the holy sacrament ceremony of the main door for the renovated church. The ceremony was held in the presence of St Stephen’s Orthodox Church, Salalah Vicar/President Fr Philip Varghese, and a large number of faithful.
One of the four Indian Orthodox Churches under Orthodox Diocese of Ahmedabad, the Salalah parish is named after Saint Stephen recognised as a saint and first martyr in Christian theology.
The construction works of the renovated church is presently being undertaken and is expected to be completed by December 25, 2019.

The scheduled consecration ceremony will be held in two parts on January 9,

The architect for the construction is by Anil from Creative Designer and Consultant, Salalah. Contractor as Biji Varghese from Al Sarfait Contracting Company and Vijumon Varghese, Ms Chippy Vijumon and Fr Philip Varghese as designers.

A souvenir will also be released during the consecration ceremony.
For details contact Vicar Fr Philip on GSM 968-90903738 or the convener on 968-92677600. Email: salalahststephensocym@gmail.com