Top officials, including Sub Collector V R Krishna Teja, were present when the Orthodox faction was handed over the control of the church. 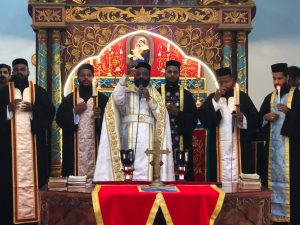 ALAPPUZHA: Ending a decade-long struggle, the Orthodox faction was given control of St Mary’s Church, Kattachira, near Kayamkulam, under police protection on Saturday. It assumes significance in the wake of the Supreme Court hardening its stance on implementing its earlier order upholding the 1934 constitution of the Malankara Orthodox Syrian Church.

According to a Revenue officer, they had directed the police to make arrangements to implement the court verdict. “Both factions accepted the order and the ownership of the church was pea

cefully handed over to the Orthodox faction,’’ the officer said.

According to Kayamkulam DySP R Binu, “We made necessary security arrangements to help the Orthodox faction enter the church in the wake of the SC order. The vicar and the faithful belonging to the Jacobite faction reached the place to prevent the entry of Orthodox members. However, we blocked them,” the DySP said.