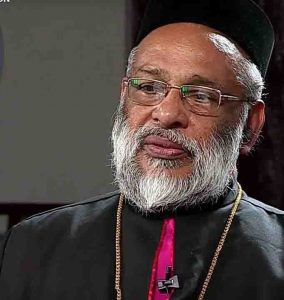 In the passing away of Mannaraprayil Achan, as he was popularly known, I lost a very close personal friend of several years. We were classmates during my undergraduate studies, though he was senior to me in age by a few years and our friendship has been warm through all these long years.
He was a man of strong convictions and fearlessly called a spade a spade and thus earned more critics and enemies than friends. And he didn’t care.

I am sure that but for his diplomacy and manipulative skills Thrukkunnath Seminary would have been easily captured by the rival faction. Orthodox Church should be obliged to him to that extent, at least.
As prohibition activists we worked together in the Kerala State Prohibition Council adding another dimension to our friendship.

As St.Paul famously said, he fought his fight, kept the faith and finished his race.

I pay my respectful homage to my friend’s revered memory.

I came to know Rev Fr Mannarapryil from my Sub Collector days in Muvattupuzha in 1983. Church dispute was at its peak during that period . Achen used to represent our Church in many conciliatory talks I initiated. He was clinical in his approach. I found a fearless fighter in him. He was not bothered about what others felt. Always stood for what he considered right. When I carried out a major eviction in the premises of Puthencruz church (where Mar Divanyasios ha

d illegally encroached into government property) he stood firmly behind me. It was on account of this that I was transferred from Muvattupuzha to Alleppey. It was Achen who invited me to speak in Theophilos Thirumeni’s birthday celebrations in Thrikkunnath Seminary. Against all odds, I attended the programme and incurred the wrath of many powerful people. Again, Achen stood behind me. Achen was like a wall. Nobody could breach it. Our church owes a lot to this fearless, passionate exponent of Orthodoxy. May his soul rest in peace