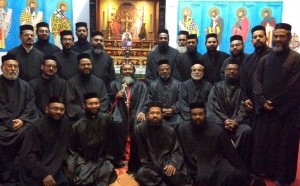 The Metropolitan and the clergy have expressed their support of the #WCC’s campaign which uses black clothes as a sign of solidarity with the victims of rape and violence.

The campaign makes it clear that there are no excuses for sexual and gender-based violence.

The WCC’s ‘Thursdays in Black’ campaign, is a simple gesture of wearing black on Thursdays, promotes an end to violence against women and girls. It is a united global expression of the desire for safe communities where one can all walk safely without fear of being raped, shot at, beaten up, verbally abused and discriminated against due to our gender or sexual orientation.

At its 10th Assembly in 2013, the WCC revived this campaign, born during the Ecumenical Decade of Churches in Solidarity with Women (1988-1998), partnering with the Christian Aids Bureau for Southern Africa, Diakonia Council of Churches, Northern Territory Youth Affairs Network, Victoria University Students’ Association, Uniting Church in Sweden and Church of Sweden, among others.

The WCC is a worldwide fellowship of 348 member churches who together represent more than half a billion Christians around the world.

unity, a common witness and Christian service. WCC brings together churches, denominations and church fellowships in more than 110 countries and territories throughout the world, representing over 500 million Christians and including most of the world’s Orthodox churches.

Rev Dr Olav Fykse Tveit is the present General Secretary of the World Council of Churches who was elected in August 2009, and again re-elected for a second term in July 2014.

Thursdays in Black, extended interview by Dr Fulata Moyo on