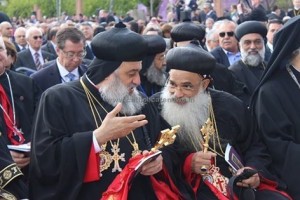 Qamishli, SYRIA: The head of the Syriac Orthodox Church on June 19 escaped unhurt an attempt on his life by a suicide bomber in northeast Syria.

The event commemorated the deaths of tens of thousands of Christians by the Ottoman army starting in 1915 in what is known as the Sayfo (Sword) massacre.

The bomber detonated his bomb outside the hall, killing himself and three members of the Assyrian Sutoro security forces and wounding five. It is believed the bomber was targeting the 51-year-old patriarch, who heads the world.

The security forces belonged to the Sotoro, a Christian militia based in Syria’s northeast.

No one has claimed responsibility for the latest attack.

The explosion occurred at the intersection of al-Quwatli and El-Kindi Park road in a neighborhood heavily populated by Assyrians.

This is the fourth attack on Assyrians in Qamishle in the past six months:

On May 22 an attack by ISIS in the same district killed at least five persons, three of them Assyrians, and injured more than a dozen.

On January 24, two explosions rocked an Assyrian neighborhood in Qamishli. The first targeted the Star Cafe, where a bomb was placed on a bicycle that was left in front of the store. The explosion killed three Assyrians and injured 20. The second blast targeted Joseph Bakery.

One Sotoro member told AFP that the suicide bomber “detonated himself near our checkpoint after he couldn’t reach his real target, Patriarch Ignatius.”

Situated along the border with Turkey, Qamishli has been regularly targeted by suicide bombings, many of which have been claimed by the ISIS group.

Control of the Kurdish-majority c

ity is split between Kurdish militia and pro-government fighters.

Syriac Christians belong to the eastern Christian tradition and pray in Aramaic. They include both Orthodox and Catholic branches, and constitute around 15 percent of Syria’s 1.2 million Christians.

The Syriac Orthodox Church also known as the Syrian Orthodox Church of Antioch, is an Oriental Orthodox church based in the Eastern Mediterranean, with a diaspora spread throughout the world, notably in Sweden, India, Germany and the United Kingdom.

It employs some of the oldest surviving liturgy in Christianity, the Liturgy of St James the Apostle, with Syriac as its official and liturgical language. Patriarch Ignatius Aphrem II assumed office on May 29, 2014.