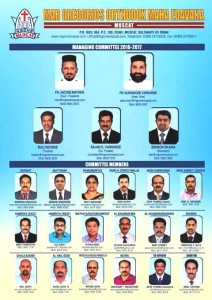 MUSCAT: The newly elected office bearers and managing committee members of Mar Gregorios Orthodox Maha Edavaka (MGOME) Muscat for 2016-17 fiscal was duly elected in the General Body meeting of the parish held on March 11, 2016.
Kalpana No 16/16 from Ahmedabad Diocese Metropolitan HG Pulikkottil Dr Geevarghese Mar Yulios has given approval of the office bearers and managing committee members who will hold

their position for the period from April 1, 2016 to March 31, 2017 unless any other orders are issued from the Diocese on the matter.
The full list under Fr Jacob Mathew, Vicar/President, and Fr Kuriakose Varghese, Assoc Vicar are as follows.
Hon Trustee: Biju George
Co-Trustee: Sajan C Varghese
Secretary: Benson Skaria
The 16-member area-wise managing committee members include: