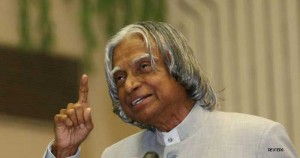 In response to my email, Dr. Alex Alexander, (Retired physician residing int he USA) sent me this email in which he narrates the story of how he was fortunate to be a roommate of Dr. Abdul Kalaam.

“I deem it a great blessing of God that I once knew & lived with a friend for a short period who became an embodiment of a true secularist and an exemplary Indian. God indeed blessed him with great accolades, a full life and an “ending” that would be an envy of every aging octogenarian, everywhere. To the best of my knowledge, he never took any medicine, since he had no chronic ailments of any kind. As a joke, he was known as “Kalam Iyer” since he was a life-long vegetarian! He Started being a vegetarian due to vegetarian mess dues at St.Joseph’s being 7 rupees less per month than non-veg mess fees., and he liked veg food so much, he remained a vegetarian, for the rest of his life. Also, he remained a Brahmachari, as he used to joke with his friends..

Over the years, I have come to admire the great service of Jesuits in integrating a modern India! While they placed all Catholic hostel-mates in separate housing etc., the first year Intermediate hostel mates of different religions (Hindus, non-Catholic Christians & Muslims, Sikhs, Parsis, Jains etc) were forced to share a room with two others, each of a faith other than one

’s own. Thus, at St.Joseph’s Tiruchirapalli, it was my good luck to be grouped with APJ & Sampathkumar Iyengar during my first Intermediate year! And that friendship became stronger and stronger over the decades and the sense & meaning of secularism also became a personalized experience for all three of us. In the “wings of fire” (p.?14) APJ, cites this experience as one of his happiest! I would concur. So did Sampath! Hats off, to the Jesuits. No wonder, Pope Francis is being adored. I wish, the Pope would talk some sense into the feuding groups of Syrian Christians!