For a Nuclear Weapons Free World for the Survival of Humanity by Dr. Paulos Mar Gregorios 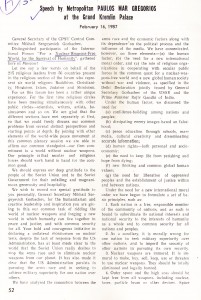 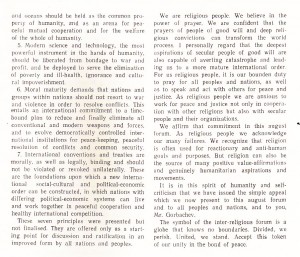 General Secretary of the CPSU Central Committee Mikhail Sergeyevich Gorbachev, Distinguished participants of the international Forum “For A Nuclear-Weapons-Free World, For the Survival of Humanity” gathered here in Moscow!

Let me say a few words on behalf of the 215 religious leaders from 56 countries present in the religious section of the forum who represent six world religions: Buddhism, Christianity, Hinduism, Islam, Judaism, and Shintoism.

For us this forum has been a rather unique experience. For the first time religious circles have been meeting simultaneously with other public circles—scientists, writers, artists, businessmen and so on. We are glad that the different sections have met separately at first, so that we could freely discuss our common problems from several distinct perspectives and starting points at depth. By joining with other elements of the world-wide peace movement at this common plenary session we are able to affirm our common standpoint—our firm commitment to a world without nuclear weapons.

Our principle is that secular and religious forces should work hand in hand for the common good. We should express our deep gratitude to the people of the Soviet Union and to the Soviet Government for their unfailing and magnanimous generosity and hospitality.

We wish to record our special gratitude to you personally, General Secretary Mikhail Sergeyevich Gorbachev, for the humanitarian and creative leadership and inspiration you are giving to this our common task of ridding the world of nuclear weapons and forging a new world in which humanity can live together in peace and justice, and with common security for all. Your bold and courageous initiative in declaring a unilateral moratorium on nuclear tests, despite the lack of response from the US Administration, has at least made clear to the World that the Soviet Union really desires to stop the arms race and to eliminate nuclear weapons from our planet. It has also made it clear that the US Administration persists in pursuing the arms race and in seeking to achieve military superiority for one nation over others.
We have analysed the connection between the arms race and the economic factors along with its dependence on the political process and the influence of the media. We have concentrated, however, on three elements—

(a] the human factor,
(b) the need for a new international moral order, and
(c) the role of religious organizations

in cooperating with secular public forces in the common quest for a nuclear-weapons-free world and a new global human society without war and violence, as specified in the Delhi Declaration jointly issued by General Secretary Gorbachev of the USSR and the Prime Minister Rajiv Gandhi of India.
Under the human factor, we discussed the need for

(a) confidence-building among. nations and peoples;
(b) dissipating enemy images based on falsehood;
(c) peace education through schools, mass media, cultural creativity and disseminating accurate information;
(d) human rights—both personal and socio-economic:
(e) the need to keep life from perishing, and hope from dying;
(f) new thinking and common global human values;
(g) the need for liberation of oppressed peoples and the establishment of justice within and between nations.

Under the need for a new international moral order we have begun to formulate a set of basic principles, such as:

1. Each nation is a free, responsible member of the community of nations, and as such is bound to subordinate its national interests and national security to the interests of humanity as a whole and to common security for all nations and peoples.
2. As a corollary, it is morally wrong for one nation to seek military superiority over other nations, and to imperil the security of other nations in pursuing its own security.
3. Nuclear weapons are immoral. It is immoral to make, buy, sell, keep, use or threaten to use nuclear weapons. They should be totally eliminated and legally banned.
4. Outer space and the high seas should be kept free from all weapons, including nuclear, laser, particle, beam or other devices. Space and oceans should he held as the common property of humanity, and as an arena for peaceful mutual cooperation and for the welfare of the whole of humanity.
5. Modern science and technology, the most powerful instrument in the hands of humanity, should he liberated from bondage to war and profit. and be deployed to serve the elimination of poverty and ill-health. ignorance and cultural impoverishment.
6. Moral maturity demands that nations and groups within nations should not resort to war and violence in order to resolve conflicts. This entails an international commitment to a time-bound plan to reduce and finally eliminate all conventional and modern weapons and forces, and to evolve democratically controlled international institutions for peace-keeping, peaceful resolution of conflicts and common security.
7. International conventions and treaties are morally, as well as legally, binding and should not be violated or revoked unilaterally. These are the foundations upon which a new international social-cultural and political-economic order can be constructed, in which nations with differing political-economic systems can live and work together in peaceful cooperation and healthy international competition.

These seven principles were presented but not finalised. They are offered only as a starting point for discussion and ratification in an improved form by all nations and peoples.

We are religious people. We believe in the power of prayer. We are confident that the prayers of people of good will and deep religious convictions can transform the world process. I personally regard that the deepest aspirations of secular people of good will are also capable of averting catastrophe and leading us to a more mature international order. For us religious people, it is our bounden duty to pray for all peoples and nations, as well as to speak and act with others for peace and justice. As religious people we are anxious to work for peace and justice not only in cooperation with other religions but also with secular people and their organizations.

We affirm that commitment in this august forum. As religious people we acknowledge our many failures. We recognize that religion is often used for reactionary and anti-human goals and

purposes. But religion can also be the source of many positive value-affirmations and genuinely humanitarian aspirations and movements.

It is in this spirit of humanity and self-criticism that we have issued the simple appeal which we now present to this august forum and to all peoples and nations, and to you, Mr. Gorbachev.

The symbol of the inter-religious forum is a globe that knows no boundaries. Divided, we perish. United, we stand. Accept this token of our unity in the bond of peace.