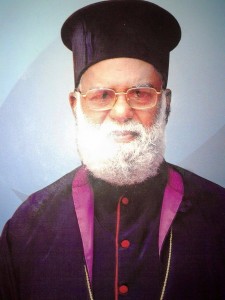 Very Rev Fr. K J Kuriakose Cor Episcopa, a true Orthodox shepherd, who reflects conviction, courage and had determination laced with extreme concern for his dearly beloved sheep. He was Belovedly called as ‘Kochachan’ born to illustrious ‘Valiyachan’ (Late Rev.Fr.Yacoub Cor Episcopa) and Kunjamma of Kariyelil family in Mulanthuruthy in 1939, he led the Church in the Northern region very sagaciously with extreme sense of purpose during its most difficult times. He was a bold and convincing spokesperson for the Orthodox Church. He was a leading beacon in very adverse conditions the Orthodox Church went through in and around Mulanthuruthy and Northern Dioceses. He has become an integral and illustrious part of Church’s existence, growth and history in Northern region and its turning points. His passionate concern and care for the poor and helpless faithful in his area is well known.

Very Rev.Fr.Kuriakose possess a very enchanting and absorbing voice that makes his Holy Eucharist celebration a divine and harmonious experience, which he still retains even at this advanced age.

He has rendered his voice to documentaries such as ‘Parumala Madhyasthan’ and ‘Mulanthurthyude Manivilakku’. He has been to more than 100 churches outside Kerala and abroad to celebrate the Holy Services.

He was made a Deacon on 29th May 1957, by HG Late lamented Paulose Mar Severios. He was anointed Priest by HG Late lamented Gheevarghese Mar Gregorios, on 30th June 1962, at Thrikkunnathu seminary. On 7th August 1999, he was consecrated Cor Episcopa by HH Baselious Mathews II of Blessed memory.

He has been an Orthodox Sabha Managing Committee member, Vice President of Marthamariyam Mahila Samajam,Sunday School District Inspector, Vice President of Beskiyamma group and various responsible positions where he showed his marking presence and leadership qualities.

His wife Smt. Leelamma is a retired School Teacher. His daughter Dr.(Mrs.)Siji George is a Professor at Manipal Engineering College. His Son Mr.Aji Kurien is an Electrical Design Engineer in Bahrain.