Is the Parumala Property Registered in the Name of the Patriarch?

“I just came by a fact that the Parumala property is in the name of the Patriarch for a long time. But I am not here to claim it. I am not here to create misunderstanding. But Parumala (St Gregorios of Parumala) is a saint that we all love and respect, and seek intercession. And I have been there many times, not as a Patriarch, but as a Metropolitan.”
— Patriarch Ignatius Aphrem II at Puthencruz, Kerala on May 22, 2018 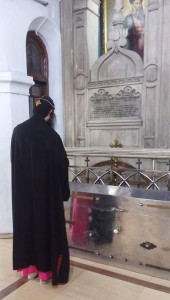 Looks like this fake narrative has now been told to the present Patriarch as well. That is why he unnecessarily made a reference to it at Tuesday’s press conference and disappointed a lot of faithful in the Malankara Orthodox Church.

To understand the history of the Parumala Church, I referred to the biography of the Saint written by Fr. Dr. Jacob Kurien (Vishuddhiyude Parimalam).  This is the information I could pick up from the biography. The owner of the original property, Arikupurathu Koruthu Mathen, and his family, donated land in Parumala to Malankara Sabha in two installments. In 1872, Koruthu Mathen donated two acres of land for the seminary. And in 1885, after his death, his sons donated an already existing church and the land around it to Malankara Sabha. Both the properties were registered in the name of the then metropolitan, Joseph Mar Dionysius V (Pulikottil II).

Ownership of the Seminary

The details of the seminary property are as follows:

The seminary property deed was written in the name of Mar Dionysius on Karkkidakam 13 of Malayalam year 1047 (1872). It was registered in the Thiruvalla register office on Chingam 16 the next year under registration no. 69.

The entire edifice of the Jacobite lie on the ownership of Parumala Church being in the name of the Patriarch can be traced to an excerpt from the title deed of the seminary published in the book Vishuddha Idayan by Prof. P.N Chacko, a Jacobite. A screenshot is given in the Jacobite website parumathirumeni.org.

Remember the year was 1872. The official Malankara Metropolitan from 1852 to 1876 was Palakkunnathu Mathews Mar Athanasius. From 1852 to 1886 the Old Seminary was under the custody of the reformists (now known as Marthoma Church). Even other Samudayam Properties were under their administration till the Royal Court judgement of 1889.

Let us leave aside all skepticism and believe the excerpt given in the Jacobite website is true to the original. Let us analyse its meaning line by line:

The above passage means I am giving this property for the seminary education of those Syrian Christians who are obedient in the faith of Moran Mor Ignatius Patriarch seated on the throne of Antioch as opposed to those who are loyal to the reformist, official Malankara Metropolitan.

The above passage gives a measure of the seminary property and says it has been registered in the name of the Malankara Metropolitan after paying all tax dues and entrusted for all times to build and run a seminary there.

This narrative is in agreement with what we know about Parumala Thirumeni’s life history. He was consecrated as a Ramban in 1872. But involvement in the Parumala Association of 1873, secretarial work for the visiting Patriarch for nearly two years, the Mulanthuruthy Association of 1876, consecration as a bishop in end- 1876, the Patriarch’s departure in 1877 all interfered with the seminary work, which he could resume only in 1053 (1878).

A Bit of History on the Original Church

The donation of the church and the land around it was executed by Koruthu Mathen’s sons Mathen Kuruvilla, Mathen Oommen, Mathen Varkey and Mathen Eapen. The registration in the name of Mar Dionysius took place on Meenom 21, 1885, again in Thiruvalla (registration no. 1227).

Fr. Dr. Kurien says the original church was set up by Koruthu Mathen himself in the name of Saints Peter and Paul in 1872 after obtaining government sanction. It was consecrated in the same year by Mar Dionysius V. This was a small church where Holy Qurbono used to be occasionally celebrated by Fr Pallivathukkal of Niranom.

It was reconstructed at Parumala Thirumeni’s initiative. The reconstruction could have started only after 1885 when the pre-existing church and the land around it was donated to Malankara Sabha by Koruthu Mathen’s sons.

The Fake Story of the Temporary Shed

Some Jacobites peddle the story that only a “temporary shed” existed there and not a proper Church until it was rebuilt by Saint Gregorios. Fortunately, we have a more solid proof about the original church. Parumala is listed as #80 in the list of parishes that attended the Mulanthuruthy Synod of 1876 (June 27-30). And the representative’s name is given as Vicar Karingottu Daniel Catanar. One doubts whether any representation to such an important synod could have been made by the vicar of a “`temporary shed” or for that matter, whether a “temporary shed” would have a vicar.

Thus, as early as 1876 we have the record of a formally accepted Parumala Church that could send a representative to the Mulanthuruthy Synod.

Additionally, the Kandanad Granthavari written by late bishop Shemvun Mar Dionysius also notes that Koruthu Mathen “had consented to building a small church adjacent to the seminary, as soon he gets permission from the government “. (quoted in Indian Orthodox Church: History and Culture by Rev Dr Joseph Cheeran et al. Page 655) This is in agreement with Fr. Dr. Jacob Kurien’s finding that the earlier church was built by Koruthu Mathen himself.

Consequently, in the light of overwhelming evidence, I am inclined to believe Fr. Dr. Jacob Kurien when he says that the original church was constructed by Koruthu Mathen himself in 1872 and consecrated by Mar Dionysius. The original church must have been set up under the name of one or more saints (in the names of Saints Peter and Paul, says Fr. Dr Jacob Kurien). And when it was reconstructed, it was very unlikely that Parumala Thirumeni would have changed its name, regardless of whether it was originally in the names of Saints Peter and Paul, or just in the name of St Peter. But despite all this, we are told that Parumala Thirumeni dedicated the church in the name of St. Peter because the property was “registered under the name” of the Patriarch of Antioch!

I rest my case.