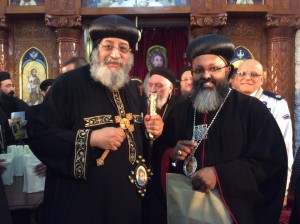 AHMEDABAD: On behalf of the Indian Orthodox Church, HG Pulikkottil Dr Geevarghese Mar Yulios, Metropolitan, Orthodox Diocese of Ahmedabad, has expressed his profound anguish and heartfelt condolences at the brutal killing of 25 people at St Peter’s Coptic Orthodox Church in Cairo, the deadliest on the Christian minority in years.

HH Baselios Mar Thoma Paulose II, Catholicos of the East and Malankara Metropolitan, has also expressed his solidarity with the Coptic Church, requesting our faithful to uphold the Coptic Church in prayers and observe special vigil, and prayers for the victims on December 18, 2016, Sunday.
“May our Lord forgive the culprits and console the victims,” the Metropolitan noted in his letter to HG Bishop Angaelos, General Bishop of the Coptic Orthodox Church in the United Kingdom.
The Metropolitan has also expressed his deep anguish over barbaric killing and heart-rending pictures showing Pope Tawadros II, head of Egypt’s Coptic Orthodox Church, and clergymen standing next to the coffins of the victims of the bomb explosion.
The bombing, which occurred during the regular Sunday worship on December 11, at St Peter’s Coptic Orthodox Church in Cairo, adjacent to the Grand Cathedral of Saint Mark, was one of the worst ever on Christian place of worship in Egypt.