Ahead of feast, statue of ‘Goan saint’ found in Karnataka river 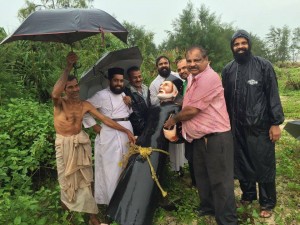 Panaji: The finding of a statue of Goan priest, Blessed Saint Fr Roque Zeferino Noronha, floating in River Sita at Hangarkatte, Karnataka, has stirred the Syrian community in Brahmavar town.

The recently-painted wooden statue and another of St Lawrence were found in the river off a dockyard area on July 4 and brought ashore next day.

Fr Noronha was born in Anjediva, but his family members had settled at Chorao and other places. He served as an assistant parish priest in Salvador do Mundo. Later, however, he joined the Syrian church at Brahmavar, about 10km from Hangarkatte, where the statue was found. He built St Mary’s Church on his own.

The Catholicos of the Indian Malankara Orthodox Syrian Church, Baselios Marthoma Paulose II had declared Noronha and another priest from Verna, Fr Antonio Francisco Alvares (Mar Julius) blessed saints at Brahmavar on December 6, 2015. It was a significant moment for Syrian Catholics and Goans.

“For us, the more we think about it, finding the statue in a place nearer to the church without any damage and just before Blessed Saint Noronha’s feast is miraculous,” said Fr C A Isac, vicar general of Brahmavar St Mary’s Orthodox Cathedral.

The Goan priest who was born on October 20, 1850, and endeared himself through his work for the poor also promoted education for them.

Brahmavar is preparing for his feast on July 23. “This death anniversary will be significant as it will be the first feast after he was declared blessed saint last year,” Isac told TOI from Brahmavar.

The statue carved out of a single block of wood is about seven feet high. But the church and the laity in the town are baffled and trying to solve the puzzle. Did some artist carve it and later reject it?

A police complaint has been filed and the church is waiting for feedback.

For now, the statue has been kept in a special room. “In our church, there is no tradition of making statues,” Isac said.

Blessed Saint Fr Roque Zeferino Noronha was born in Anjediva but his family had settled in Chorao. Later in life, he joined the Syrian church at Brahmavar