The Liturgy of Great Friday: A Meditation by John Kunnathu 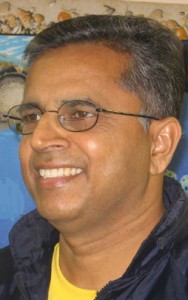 death can easily be overcome with the awareness of the truth.

Death appears like a fearful monster in darkness or in dim light; its reality becomes clear in bright daylight. Darkness is caused due to the blindness of the inner eye. When the inner eye gets opened, the truth will be known. You shall know the truth, which will make you free, Jesus said. Thus it is the opening of our inner eye that saves us from the fear of death and many other fears and misconceptions.

2. Death as a Real Monster
The Death that Jesus killed was not a toy-snake but a real one. It is the same death that Adam died in the Garden of Eden. It is also the same death that the prodigal son died. Death ends life. The death of Adam was the end of the heavenly life he enjoyed in the garden. Killing this death means regaining the heavenly life that Adam enjoyed. Adam lost heavenly life (died) by disobeying God, but the second Adam regained the heavenly life by obeying God unto death.
Broken relationships is the primary existential problem for us and for any other beings. Our relationship with God, with each other, and with nature is broken. Right relationship with God and our fellow beings is the basis of healthy existence, and so broken relationship leads to unhealthy existence or even nonexistence. Broken relationships end heavenly life (death), and it is represented by a dreadful monster in the Great Friday liturgy.  Though death is natural, death that ends heavenly life (spiritual death) is unnatural and undesirable. It is not a toy monster, but a real one. Jesus killed this monster by consciously maintaining oneness with God. Thus Jesus killed Death by his death. Jesus invites us to follow his example by doing the will of God, and be in his family. Whoever does my father’s will is my mother, sister, and brother, Jesus said.
Thus there are two kinds of death– one is like a real monster, but the other is like a toy-monster. The first step in facing the monster is to identify the real one.  If the toy-monster appears to be the real one, we never face or conquer the real one. Jesus correctly identified the real monster, so he was never afraid of the toy-monster. Jesus invites us to use our inner eye so that we can identify the real monster, and conquer him.
Mar Aprem might modify the story a little bit to include a toy-monster as well.
Once upon a time, there was a great empire ruled by a great and powerful emperor. People lived under the emperor’s rule happily and peacefully until one day a monster began to snatch people away and put them within his dungeon, and made them his slaves. In addition to this monster, people were easily deceived by a huge toy-monster, which they mistook to be the real one, and they ran in fear. The real monster could easily hide behind the toy one, and catch the people who ran in fear. The emperor decided to end the terror of the monster. He made a plan, and entrusted his son with this task. The prince passed the toy-monster, and approached the real monster disguised as an ordinary, helpless citizen, and the monster caught him right away and put him in his den. Once inside, he killed the monster and delivered all the people who were imprisoned there.
Mar Aprem might warn us against a literal interpretation of such parables. We should never make the silly mistake of assuming that this story, which is a product of human imagination, is a historical event. We should not be so foolish as Jesus’ disciples when they took literally the advice of Jesus “Beware of the sour dough of Pharisees”. It is like a fairy tale for children which expresses certain aspects of the reality. According to this story, the monster was killed by the prince, and our commonsense tells us that someone dead is no more alive. But the truth is that our separation from God, the real monster, needs to be killed by each of us following the example of Jesus.
Thus the Great Friday celebration teaches us how to face our most basic existential problems. First, we need to identify between our real issue by differentiating it from what appears to be the issue. We often mistake death to be an issue, but really it is not. Our real issue is broken relationships. Our relationship with God, fellow beings, and with nature — all are broken. Once we correctly identify our real issues, we need to explore how we can effectively find  a solution to these issues. Mending our broken relationship with God is primary. We need to accept Jesus as our role model and follow the will of God even if we have to give up our life. Once we mend our relationship with God, we can easily mend our relationship with our fellow beings and with nature. In short, our issues are spiritual darkness and spiritual death, and the solutions are light (with inner eye open) and life (with our relationships mended).
Read this in Malayalam here

Read the story of Good Friday in English and Malayalam