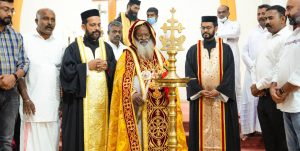 His Holiness Baselios Marthoma Mathews III, Catholicos of the East and Malankara Metropolitan, on his 73rd birthday on February 12, 2022, launched ‘Sahodaran’ (meaning ‘brother’ in Malayalam), a charitable project in the blessed memory of his predecessor late HH Baselios Marthoma Paulose II, the former Catholicos who passed away on 12 July 2021.

A thought which instantly struck the Primate’s mind was about using a part of the money towards the celebrations for charitable works which will help the downtrodden in the society.
Says the Catholicos about his pet project in an interview: “If one of our own brothers suffer from injustice or poverty, will we be happy? I, therefore, call upon all religions and leaders to come forward towards a wider ecumenism in realizing this aim.

“The ‘Sahodaran’ charitable project aims to convey a message of ‘universal brotherhood’.  I envision a global role for the project and one day we will be able to realize a golden future where we all can live peacefully without any form of rivalry, suffering or injustice,” the Catholicos explained.

His Holiness made it clear that he was not sure of the project coming to its fruition but made a beginning inviting one and all to contribute towards the project.

He quoted from the Scriptures to say, “Lend me your ears,” and urged others to unitedly work towards the goal.

The project aims to endow and support seven primary categories and help the financially distressed with offer of monetary aid and assistance for affordable housing, wedding grants, educational help, healthcare support, protection for the physically and mentally challenged, care for the elderly and aged, and financial aid for poor farmers and workers, irrespective of caste, creed or nations. 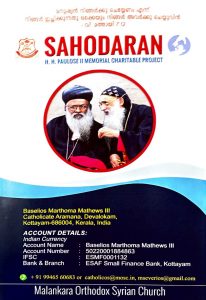 The Primate of the Malankara Church who was enthroned as the 22nd Malankara Metropolitan in October 2021 and the 9th Catholicos called upon all religions of the world to come together and share their riches for the betterment of humanity and justice.

The Catholicos wanted everyone to strive to tackle problems of the world through sharing and following the gospels and teachings of Jesus. “Share what we have with others, give our ears to realize this and work unitedly,” he added.

A protégé of HH Joseph Mar Pachomios (1926-199), His Holiness is known for his philanthropic projects in the southern Indian state of Kerala and formed Mar Pachomios Charitable Society in the 1990s, and today runs over 18 charitable projects all starting with the letter ‘P’, branded from ‘Priya’ pickles to ‘Prathiba’ curry powders.

The Supreme Head of the Indian Orthodox Church completed a maiden apostolic visit to the Sultanate of Oman for the Holy Week services of the MGOME Muscat where he also interacted with various ecumenical and spiritual organizations and launched the Golden Jubilee celebrations of the parish.
The MGOME under the Orthodox Diocese of Ahmedabad of Metropolitan HG Dr Geevarghese Mar Yulios is celebrating its Golden Jubilee celebrations this year under Vicar/President Fr Varughese Tiju Ipe and Associate Vicar Fr Abey Chacko.