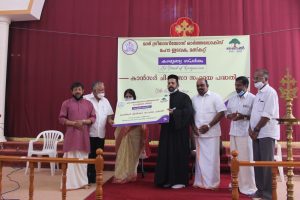 MUSCAT: Mar Gregorios Orthodox Maha Edavaka (MGOME) launched its Thanal charity project 2021-2022 in aid of cancer patients.
The charity project named ‘A touch of compassion’ was launched after the holy Eucharist at St Thomas Church, Ruwi, on September 24.
New MGOME Vicar/President Fr Varughese Tiju Iype in his address said the Maha Edavaka was popular through its ‘signature project’ of the Thanal aid programme which has offered a shade of help for the poor and distressed in the Gulf Arab desert land.
“The project endeavors to project Christ’s mission towards helping the poor which has been the witness of the church since the project was first launched in 2006,” the Vicar added.
Dr Rajyashree Narayankutty, Founder-Director, Barakath Al Noor Clinic, the keynote speaker, said the church has undertaken a noble project by deciding to help the poor cancer patients.
“Those afflicted by this dreadful disease would have had to shell out huge amounts towards diagnosis and for treatments like chemotherapy, radiotherapy and tests. The fear of the disease and huge costs usually deter the patients from seeking further treatment,” she said and called upon all to extend help and wished the project all success.
Senior parish member and Malankara Association Council member, Dr Geevarghese Yohannan, who also spoke made the customary initial contribution towards the project along with Dr Rajyashree, also a noted danseuse.
The project was launched by jointly lighting the traditional lamp by the Vicar, chief guest and the office bearers with the church senior choir in chorus.
The Maha Edavaka under Orthodox Diocese of Ahmedabad headed by HG Dr Geevarghese Mar Yulios has over the years been involved with praise worthy charity projects namely helping cancer and kidney patients, marrying poor girls or building homes for the poor.
The project was launched in 2006 under the then Vicar Fr Shaji Mukadiyil Baby and has completed 15 years of successful service to the poor irrespective of caste or creed.
Sabu Koshy (Trustee), delivered the welcome address while Koshy M Tharakan (Co-Trustee) proposed the vote of thanks.
Besides Fr Tiju Iype as Vicar/President, the Thanal Charity Project Committee for 2021-2022 comprises of Sabu Koshy (Trustee), Koshy M Tharakan (Co-Trustee), Nidhin Babu (Secretary), Giji P Thomas (Convener), Biju George, Jabson Varghese and Aji Thomas.
~ By Liju Cherian