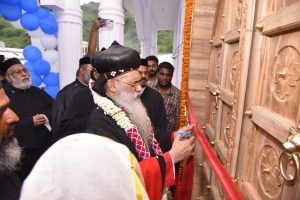 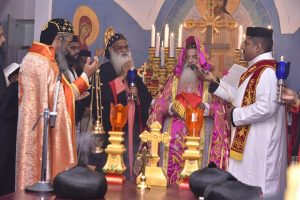 ABU ROAD, Rajasthan: His Holiness Baselios Marthoma Paulose II, Catholicos on the Apostolic Throne of St Thomas, Malankara Metropolitan, and Primate of the Indian Orthodox Malankara Church, has blessed and consecrated St Thomas chapel and retreat-cum-research centre at Abu Road, Rajasthan.
HG Geevarghese Mar Coorilos, Metropolitan, Diocese of Bombay, HG Dr Geevarghese Mar Yulios, Metropolitan, Diocese of Ahmedabad, were the co-celebrants during the holy consecration services spread over two days.
The ‘spiritual space’ is the dream project of HG Dr Geevarghese Mar Yulios, Ahmedabad Diocese Metropolitan, as the Bishop completes a decade after taking over the reins of the Diocese.
On September 10, His Holiness the Catholicos, Mar Coorilos and Mar Yulios addressed the clergies at a priest conference of the Diocese of Ahmedabad before the inauguration of St Thomas Orthodox Retreat Centre, in the evening. The Catholicos also led morning prayers at St Thomas upper room chapel, Naroda, central Ahmedabad, before proceeding to Abu Road.
On September 11, the Catholicos led the second part of the consecration and holy liturgy which was followed by benediction and blessings. A public meeting was also held during the occasion.
Earlier, upon arrival at the Ahmedabad International Airport on September, 9, His Holiness was received by Diocese Metropolitan HG Mar Yulios, Diocese Secretary Fr James Geevarghese, vicars and several laymen.  The Catholicos began his Apostolic visit with evening prayers at the St Mary’s Orthodox Cathedral, Ahmedabad, before proceeding to Rajasthan.
Built-in Rajasthani architecture style, the retreat centre comes as the realisation of Metropolitan’s dream vision of having a spiritual space of teachings in the traditional guru-shishya concept with opportunities to learn Orthodox liturgy, meditate among nature and a spiritual centre for engaging the faithful in the true faith and discipline of the holy Church.
Flanked by natural wonders of the Aravalli ranges in Mount Abu, the retreat centre is located at Kui village, Sirohi district of Rajasthan.
The beautiful chapel named after St Thomas with Orthodox iconography has a facility to accommodate 40 people at a time to study together aided with a high tech media room.
Located in the only hill station of Rajasthan, the famous Mt Abu is about 20 kilometres away and Nakki Lake, a paradise for nature lovers flanked by amazing natural wonders, and home to Guru Shikhar, a peak in the Arbuda mountains, the highest point of the Aravalli Range and Dilwara temple of the Jains.
Those interested to financially the research centre may kindly contact Fr Philipose Abraham (Reju Achen), Manager, St Thomas Orthodox Retreat Centre, Abu Road on his mobile +91-9426347399.