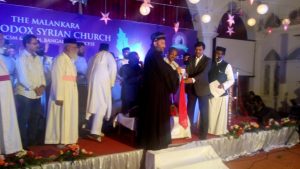 The Metropolitan also released a book titled Viswa Mannavan which is an independent presentation based on the hugely popular book, Cosmic Man – The Divine Presence, written by HG Dr Paulose Mar Gregorios (1922-1996).

Varghese Daniel has translated the book into Malayalam which was released on December 2 and is the first systematic and comprehensive attempt in understanding St Gregory of Nyssa, the profound Greek philosopher of the Christian era.

Fr Varghese P Idichandy, Vicar/President, St Gregorios Orthodox Church, Mathikere, has once again led with the concept and thematic design of both, the wall and table top versions for the 2018 calendar.
Ms Asha Biju, spouse of Biju T Sam, architect, has complied the lectionary and elaboration of the theme for the calendar. Siju from National Printing Press, Koramangala, has perfected the design work.
Special thanks to Zachariah Mathew from St Thomas Maha Edavaka, Bangalore East, and Mathew Jacob from St Baselios Orthodox Church, Marthahalli for their contribution to the calendar.

The main calendar profiles the life of Prophet Moses, the chosen leader of God’s people, starting from God’s miraculous appearance to him at Mt Horeb till his death in the land of Moab. The shorter table top deals with a brief study of the 26 Holy Fathers remembered in the Fifth Thubden. The calendar also lists the lectionary and Sabha Panchangam month-wise.