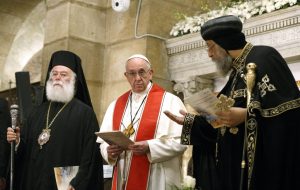 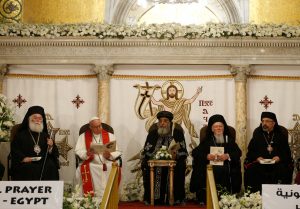 Church leaders, led by Pope Tawadros II and Pope Francis, were gathered to pray for the people of Egypt, for unity, for peace and justice in St. Peter and St. Paul’s Church, the chapel next to Saint Mark’s Coptic Orthodox Cathedral that was bombed in December 2016, now restored.

Pope Francis and Pope Tawadros entered in a short procession to the church where 29 people died and 47 were wounded on 11 December 2016. The World Council of Churches general secretary Rev. Dr Olav Fykse Tveit took also part in the procession together with church leaders from Egypt and from other parts of the world.

Inside the small church, each of the eight Christian leaders seated before the congregation, with Pope Francis; Pope Tawadros of the Coptic Orthodox Church of Alexandria; Ecumenical Patriarch Bartholomew I, Archbishop of Constantinople; Pope and Patriarch Theodore II of Alexandria and All Africa; Patriarch Ibrahim of the Coptic Catholic Church of Alexandria; Anglican Archbishop Mouneer Anis, Primate of the Province of Jerusalem and the Middle East; Patriarch Gregory III Laham, of Antioch and All the East, and Alexandria and Jerusalem; and Rev. Dr Andrea Zaki, president of the Protestant Community of Egypt, and director of the Coptic Evangelical Organization for Social Services.