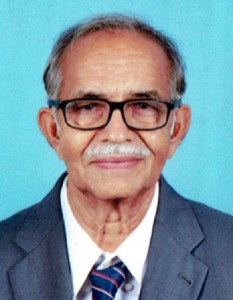 The Honorary Doctorate D.D of the Serambore University will be conferred on Prof. K.M. Kuriakose Vakathanam, former Principal, Mar Dionysius College, Pazhanji and St. Thomas College, Bhilai in recognition of his Yeoman Service to the society for the past six decades. A scholar in four subjects, historian  and   writer,  Prof. Kuriakose   has  authored 10 books. He has been honored with three national awards for his educational contributions including the one ‘Dr. Sam Higgin Bottom National award’ instituted for the best principals of the country and other three awards for other meritorious contributions. He has been also awarded with 7 ‘Prasasthi Pathras’ by V.V.I.Ps including Vice-Chancellors for his distinguished services.

Prof. Kuriakose is pioneer to establish an anti-narcotic cell in an Indian College and to visit schools and colleges conducting awareness programmes against the ill-effects of narcotics. He has also administered the anti-narcotic pledge to more than three lakhs of students to the effect that they would never consume drinks or drugs. He is also pioneer to start pre-marital counselling in a college. Credit goes to Prof. Kuriakose for planting a unique theme park with the title ‘The Vande Matharam Park’ in front of a college (Bhilai) depicting the message of unity in diversity. The park is an allegorical representation of ‘Mother India’. A multi-linguist, Prof. K.M. Kuriakose has also translated the holy liturgical texts of the Malankara Orthodox Church into Hindi.