His Holiness the Catholicos will inaugurate ThalamuraSangamam 2016 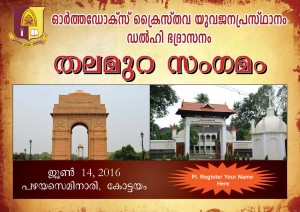 New Delhi: His Holiness BaseliosMarthomaPaulose II, the Catholicos and Malankara Metropolitan will inaugurate the ThalamuraSangamam 2016 being organised by the Orthodox Christian Youth Movement (OCYM), Delhi Diocese on 14th June 2016 at Old Seminary Kottayam. His Grace Dr. Youhanon Mar Demetrios, Metropolitan of Delhi Diocese, His Grace Yuhanon Mar Polycarpos, President of OCYM and Metropolitan of Ankamaly Diocese and dignitaries from various walks of life will attend the function.

This is the second time OCYM is taking an initiative to honor the former priests and members who were part of Delhi Diocese for many years and currently settled in Kerala or other parts of India.

The Malankara Orthodox Syrian Church is having its presence in the Capital city of India for more than seventy five years. The church has grown manifolds over the years both in terms of members and churches. Today the Delhi Diocese is one among the prominent dioceses of this Church. The Delhi Diocese from its humble beginnings has grown into a diocese with thirteen parishes in and around Delhi alone. Overall there are sixty one parishes including some congregations spread over Uttar Pradesh, Rajasthan, Madhya Pradesh, Haryana, Punjab, Chandigarh, Delhi and United Arab Emirates. It also has many prestigious educational and medical institutions, which caters to the well-being of its members as well as the local people.

The growth of the Diocese is all because of the tireless efforts of the Bishops, Priests and the believers. There are many spiritual organizations that are functioning proactively under the diocese.  The spiritual organization that has continued leading from the front is the Orthodox Christian Youth Movement.  OCYM has initiated various activities and projects over the years for the spiritual upliftment of the Youth. The youth wing of the church has always been proactively running charity activities as well. OCYM Delhi stands out for its unique way of functioning. One among them is the ‘ThalamuraSangamam’ a program that was last organized in year 2011 at Parumala Seminary. The objective behind organizing this program is to honorthe former priests and members of Delhi Diocese who are now settled in Kerala or other parts of the country. This program aims at building a platform for interaction between the current and former members of the diocese, a true synergy of enthusiasm with experience.

ThalamuraSangamam 2016 will be held on 14th June 2016 at Old Seminary, Kottayam from 9:30 a.m onwards. The program will start by an incense prayer at the tomb of the first metropolitan of Delhi Diocese late lamented Dr. Paulose Mar Gregorios.

Orthodox Christian Youth Movement (OCYM) Delhi released a promotional video having the title song for ThalamuraSangamam 2016, which is scheduled to be held on 14th June 2016 at Pazhaya Seminary, Kottayam.

Title song is produced by the School Sacred Music, the musical wing of Delhi Diocese. Lyrics of the song arewritten by Mr Jeebo GKulathinkal and music composed by Mr Thomas Alias. Click here https://youtu.be/b8yPRMuAUfs  to view the video.  This programme will webcast by Gregorian tv (www.orthodoxchurch.tv) http://orthodoxchurch.in/?p=47214.