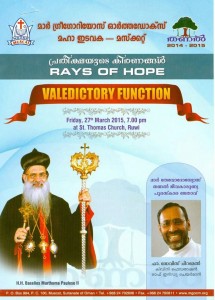 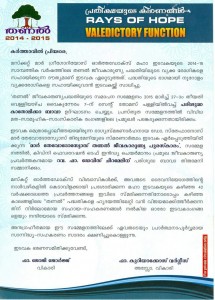 The award will be presented at the valedictory of Thanal Project on March 27, Friday, at St Thomas Church, Ruwi.
The function will be attended by Indian Ambassador to the Sultanate of Oman HE J S Mukul or Deputy Chief of Mission Smt Gloria Gangte, Rt Rev Gregorios Mar Stephanos, Episcopa of Kunnamkulam-Malabar Diocese, from Marthoma Syrian Church and others.
Muscat Mar Gregorios Orthodox Maha Edavaka had launched the Thanal charity project for 2014-15 in aid of kidney patients called ‘Rays of Hope’ to help the needy kidney patients.
Fr Davis is an Indian Syro-Malabar Catholic Church priest and the founder of Accident Care and Transport Service (ACTS) and Kidney Federation of India. Well-known as ‘Kidney Priest’, he has set an example for universal brotherhood and compassion by donating his kidney to a Hindu man.
The Supreme Head of the Indian Orthodox Church will also be the chief celebrant at the Holy Week programme of the Muscat Mar Gregorios Maha Edavaka from March 27 till April 4, Holy Easter Service.

This will be the third visit of the Catholicos to the Muscat parish having earlier visited during 2011 and 2012 after his elevation to the throne as Catholicos of The East in 2010.

The Primate will arrive at the Muscat International Airport from Kerala on March 26 morning. On March 27, the Catholicos will take part in the Catholicate Day Celebrations and release of the parish directory of Maha Edavaka.

Elaborate arrangements have been made for the Holy Week services. Vicar/President Fr Joji George Koickalethu and Associate Vicar Fr Kuriakose Varghese have requested the faithful to attend the programmes in larger numbers.