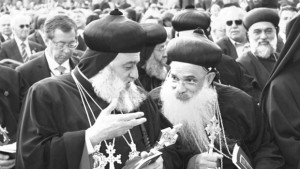 “There is no future without peace. Peace is the future” – Patriarch Ignatius Aphrem II.

Damascus: His Holiness Ignatius Aphrem II – Patriarch on the Apostolic Throne of St. Peter in Antioch and All East has urged the need for peace and conciliar unity between the Syriac Orthodox Church and the Indian Orthodox Malankara Church. The historic meeting of the Patriarch with Catholicose of the East in Armenian last month ( April 2015) is considered to be a turning point for reconciliation in Malankara.

It was reported that some of the faithful in India expressed their concern to the Patriarch on his meeting with the Catholicos. But His Holiness relied on the need for ultimate peace. We need to find peace not only in Syria and Iraq but also in Malankara reminded the Patriarch.

The Patriarch has stated several times that he wholeheartedly supports peace and reconciliation between the two ancient families of the Oriental Orthodox Communion. Peaceful co-existence is very important and all parties (Syriac Orthodox Patriarchate, Indian Orthodox Malanakra Church, Syriac Orthodox Church in India, sister Orthodox Churches)  will be part of the dialogue process with mutual respect equal participation.