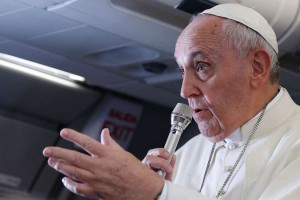 VATICAN CITY – Even as their theological dialogues continue in the search for full agreement on doctrinal issues, divided Christians are called to work together for justice and peace, especially in the Middle East, Pope Francis said.

“May the intercession and example of the many martyrs and saints who have borne courageous witness to Christ in all our churches sustain and strengthen you and your Christian communities,” the Pope told church leaders from the region.

Pope Francis met Jan. 30 with members of the International Joint Commission for Theological Dialogue between the Catholic Church and the Oriental Orthodox Churches, which include churches with large communities in Syria, Iraq and throughout the Middle East.

The Oriental Orthodox churches participating in the dialogue include the Coptic, Syriac, Armenian, Ethiopian, Eritrean and Malankara Orthodox Syrian churches.

“At this time,” the Pope said, “we especially feel dismay and deep sadness at what is happening in the Middle East, especially in Iraq and Syria,” where Islamic State militants continue their campaign of terror.

“I think of all those living in the region, including our Christian brothers and sisters, and many minorities, who are experiencing the effects of a prolonged and painful conflict,” he said.

In addition to thanking the Pope for his repeated public prayer for all those facing persecution and death in the region, Coptic Orthodox Metropolitan Bishoy of Damiette, co-chair of the dialogue, formally presented Pope Francis with a copy of the agreed statement the dialogue commission completed during its late-January meeting at the Vatican.

The document looks at “the exercise of communion in the life of the early church and its implications for communion today.” Top officials of the Vatican and the six Oriental Orthodox churches will review and be asked to approve the document.

The Oriental Orthodox churches are ancient Christian communities that broke from the rest of Christendom in 451 when they rejected the Council of Chalcedon’s formulation for explaining how Christ is one person in two natures — human and divine.

Dialogue and study have led theologians and church authorities on both sides to affirm that the Christological differences were not doctrinal; rather, both sides profess the same faith but use different formulas to express it.

Common declarations about Christ’s humanity and divinity were signed between 1971 and 1996 by the heads of each Oriental Orthodox Church and Blessed Paul VI or St. John Paul II.

Father Gabriel Quicke, an official at the Pontifical Council for Promoting Christian Unity, told Vatican Radio Christians can look back at the first five centuries of Christianity, “realizing that we have many elements in common” and that the unity that existed originally is Christ’s will for his church.

The dialogue members have decided to proceed with their discussions by looking at the sacraments, particularly baptism, which all Christians share and makes them all “brothers and sisters in Christ,” he said.

“We can only be grateful that after 1,500 years of separation we still find agreement about the sacramental nature of the church,” about the apostolic succession of bishops and about the obligation to share the Gospel with the world, Father Quicke said.